The Negroes Are Congregating catapults into a 4 city voyage…

The Negroes Are Congregating asks a lot of impolite questions about the ongoing effects of racism and how that ideology continues to exists in Canada and around the world. The Jamaican-Canadian writer, Natasha Adiyana Morris, infuses a taste of Toronto that incorporates accents, landmarks and a sort of local trivia often ignored by mainstream media. Themes of physical, mental, and spiritual freedom cycle from beginning to end.

“Talking about race is exhausting and so I wanted to form my thoughts into live characters, displaying multiple sides of the race conversation. Some characters are full-on revolutionaries, others are complacent, there are parodies and plenty of satire but it ALL reflects uncomfortable truths.”

Each of the actors play several roles, whereby names are irrelevant but gender is constant. The text is a flow of monologues, including spoken word and prose. It won’t take long for the audience to catch a few Canadian references throughout the play and find themselves laughing in one scene to tearing in the next. 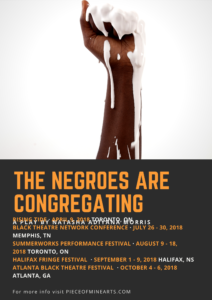