On Friday February 20th, the Piece of Mine festival presented day two of Black Men in Theatre, a stimulating journey of discovery into the black male experience.

Black Men in Theatre is a glance into the colourful soul of the black male experience.

Many of the pieces enacted by young actors, most of whom were men, depicted various intimate moments experienced by males in the black community.

Alternatively, the last featured piece, entitled “Ayiti” stood apart from the preceding pieces which were intimate and mainly solo acts, as it was a historical adaptation based on the early planning and action surrounding the Haitian revolution, written by Chevy X and including leads roles performed by both men and women.

The tear inducing, thought provoking, and laugh-out-loud brilliance of the night’s performances came often. This production is a must see for people of all backgrounds and ages, and while there were many great performers, only a few notable contributions to the festival are mentioned here. 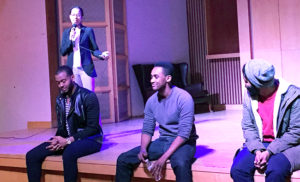 Just moments into the start of the night, Leighton Alexander Williams brought the audience to laughter in agreement with his humorous and profound solo piece in which Leighton made it utterly and unforgivably clear that blackness should not be mistaken for ghettoness.

Later in the evening, the laughter rose and then ceased abruptly as Luke Reece took the packed crowd on a nostalgic and heart-felt journey through the playground, as he reminisced about the anger and hurt endured as a result of certain familial and social complexities centred around the relationship with his father. Reece’s sincerity and commitment to his role made is easy for anyone who had ever experienced family related complications to connect with the piece.

Family relations and fatherhood was a prominent theme throughout the night. Members of the audience were close to tears when Troy Crossfield and Dennis Langley illustrated some of the harsh realties of a strained father-son relationship. Both black, male actors embodied the anger, sadness, fear, and love that the performance provoked. The actor’s brilliance left the audience with silent praise for the future of a determined, black family.

Arguably, the most rewarding part of the show was the ability to gain access to the often unspoken moments in black lives. These are the moments that build character, explain action or the lack thereof, and encourage self-reflection and even change.

Into an audience filled with mostly black faces, Chevy X did just this, as he unearthed the seed of black revolutionary action and planted a visual of Haitian history. Not only did he nurture the fields of the past with a historical retelling but he also watered and bore fruit, by highlighting the role of women in spawning the first black republic. 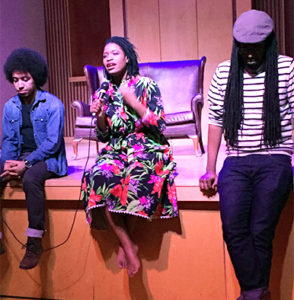 Chevy X’s play, inspired by CLR James’s “The Black Jacobins” emphasized the women’s role in fighting, planning, and supporting the revolution. Specifically, the role of Jean-Jacques Dessalines wife, Marie-Claire played by Sasky Louison was most remarkable. The young actress’s portrayal of general Dessalines wife brought the play to life with her unrelenting passion and comfort in the supporting role.

Black Men in Theatre was a sneak peak at the work of black Canadian playwrights, and with over three hours of hand-picked creativity cooked and served to please, the entire production showcased the deep ocean of talented actresses, actors, and playwrights that Toronto has to offer.

In order of appearance, the Black Men in Theatre featured Leighton Alexander Williams doing an adaptation of The Shipment written by Young Jean Lee; Jordan Laffrenier performing his own piece, Arbor; Incognito by Araya Mengesha; New Artful written by Joseph ‘Jomo’ Pierre, directed by Amanda Nicholls, and performed by Rudy Tijerino; Point Five, written and performed by Luke Reece, Something To Offer by Yvonne Rodney, performed by Troy Crossfield and Dennis Langley, and Ayiti by Chevy X, directed by Lucy Hamlet and Tricia Herman, and performed by Quentin Vercetty, David Deslica, Sasky Louison, and Tricia Herman.

Read more from the MOTIVATE.RELATE blog.